Since the 1960’s Chevrolet has been manufacturing there trucks to be used for many reasons such as towing, hauling things around in the bed, getting around in the bad weather and just being a pure overhauling vehicle on the road. Over the past 52 years the Chevrolet truck has grown into many different cultures in the automotive world. In Cole Lenhart’s mind, Chevrolet’s “Minitruck” line of truck’s caught his attention over the rest. Cole Lenhart’s 2000 Chevrolet S-10 shows exactly the kind of truck he wants to be seen in over any other truck they have to offer. 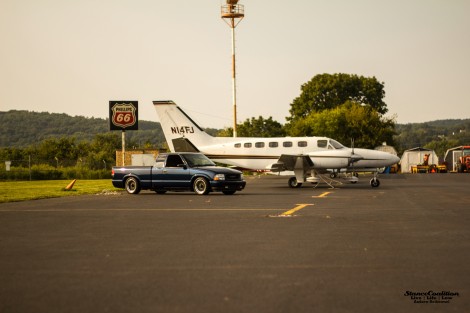 Since the late 1980’s the word “Minitruck” didn’t get used until the leading manufactures in the automotive industry started building their cars and trucks larger than the average size at the time. When most people think of a minitruck, they automatically think of the term, hydraulics, or the more modern term “bags”. In this rare situation we will not be dealing with either of those terms and will be sticking to a route less traveled, “static”.

Static is a word that can say a lot. In the minitruck world it is very rare to come across someone who will support having a static truck. Cole’s chassis has swapped out everything imaginable from the factory, to live up to the term static. With fully adjustable coilovers, and drop spindles in the front to all the way in the rear, where there are drop blocks and leaf springs to get this truck to sit just right.

Cole’s truck instantly call’s to you with its non original looks. From the GMC Sonoma front end swap to the set of original refinished Buick GNX mesh wheels, which are 16×8 all around, to the super sport mirror, LED taillights and a roll pan, with the vanity plate of “I STATIC” definitely catches your eye on the road.

On the inside there is no lack of personality. The interior all around is wrapped in a blue and teal plaid felt to accommodate for the outside. Sound quality in a daily driver is a must have for Cole. With all the factory speakers gone, Cole has replaced them all with aftermarket subs and a head unit. For those days where you want to just have a little bit of fun while sitting in traffic, Cole has a CB radio system installed as well, which is when the shenanigans begin. 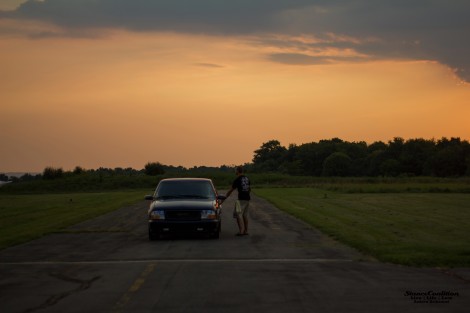 So next time you see a minitruck sittin low, make sure you can differentiate whether its static or not, as static may be the cheaper route, it is also a rare occasion, and deserves the mutual respect. 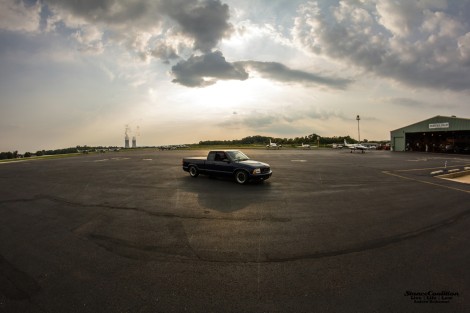 Photos and Words by: Andrew Rothermel